Erasing Roe: The Abortion Wars
Race-ing Roe: Reproductive Justice, Racial Justice, and the Battle for Roe v. Wade
by Melissa Murray
04.12.2021
Professor Melissa Murray, New York University Law School
​Feature Forum
Erasing Roe:
A Black Commons Forum
Welcome to the launch of the 'Erasing Roe' forum.  Every two weeks we will post articles that probe and provide deeper analysis of the political, ethical, and moral issues surrounding abortion and women's rights to exercise choice and autonomy over their own bodies.
We open our forum with Professor Melissa
Murray's analysis of an opinion written by
Supreme Court Justice Clarence Thomas
in May 2019, in which the Supreme Court issued a per curiam decision in Box v.
Planned Parenthood of Indiana and
Kentucky, Inc.  Of particular interest to New Black Nationalists is Murray's analysis of Thomas arguing to ban abortion to prevent its use as a tool of modern-day eugenics.
@VeseyRepublic
New Black Nationalist Network
Other Melissa Murray Articles:
The Symbiosis of Abortion and Precedent
November 10, 2020, 134 Harv. L. Rev. 308
Marriage as Punishment'
October 31, 2011, Columbia Law Review 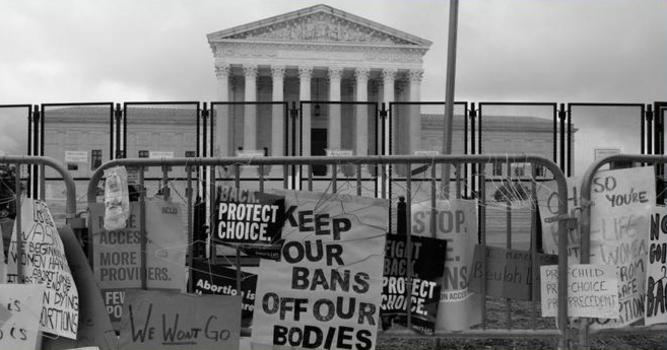 A Brief Guide to Fetal Personhood, the Next Frontier in Anti-Choice Politics
For the conservative legal movement, overturning Roe v. Wade may be just the beginning.
05.25 2022
The leaked Dobbs v. Jackson Women’s Health Organization opinion is bad on its face, given the fact that Justice Samuel Alito’s writing would gleefully destroy the constitutional right to abortion. But Alito doesn’t stop there, and anti-choice activists have no intention of letting him stop there, either. Instead, these activists are already teeing up their next big legal fight: for the constitutional recognition of fetal personhood.
Below, a primer on how the struggle over reproductive health and bodily autonomy will get much, much worse—and perhaps very, very soon.
What is fetal personhood?
Currently, constitutional rights attach to people who are actually born. Anti-choice activists think those rights should attach to embryos and fetuses, too. The Mississippi abortion restriction at issue in Dobbs, for example, uses the phrase “unborn human being”—a purposeful shift from the language of cases like Roe v. Wade, which discussed “fetal life.”
If you think the movement is limited to fetuses that have attained the possibility of viability outside the womb—around 23 to 25 weeks—you are extremely wrong. Fetal personhood is the idea that every fertilized egg is entitled to full protections of the law, and is a constitutionally-protected entity separate from the pregnant person.
At the federal level, anti-choice activists are already pushing for a national abortion ban in the event that Roe falls. Judicial adoption or legislative codification of fetal personhood would be different and even more consequential, because it would not only restrict (if not outright bar) pregnant people even in blue states from getting an abortion, but would also require them to change their behavior to protect the full-fledged person housed within them. Cranks like Kentucky Senator Rand Paul have been stumping for this idea for a long time; in the House, this year’s version of the “Life at Conception Act” has more than 150 co-sponsors.
The basic problem with fetal personhood is that it is fundamentally at odds with how pregnancy works: People don’t magically know they’re pregnant the second it happens, and thus cannot alter their lives accordingly. Most people don’t realize they’re pregnant between the fifth or sixth week, which is, incidentally, the cutoff for legal abortion in Texas right now. Fetal personhood, in other words, grants rights to someone who no one knows exists yet. And the only way for courts to meaningfully protect these purported rights, of course, is to assert total control over the bodies of people who could get pregnant at all times.
What’s the conservative case for fetal personhood?
Basically, that the courts’ interpretation of the Fourteenth Amendment has been wrong and crabbed for a long time. In an amicus brief in Dobbs, conservative law professors Mary Ann Glendon and O. Carter Snead complain that Roe extended Fourteenth Amendment protections to pregnant people but not to “unborn human beings,” thus placing them “beyond the bounds and protection of our legal system.” (Snead, a professor at Notre Dame Law School, is the same person who wrote an op-ed in The Washington Post promising that liberals had “nothing to fear” from the Supreme Court nomination of his friend of 15 years, Amy Coney Barrett.)
Read More...