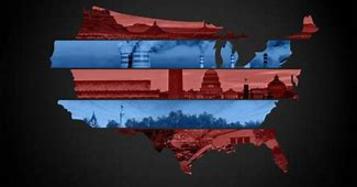 NewBlackNationalism.com
National Divorce Home
Introduction
On September 5, 2022, New Black Nationalists joined the National Divorce debate on the signal matter of American Empire's collapse and dissolution.
For some time, New Black Nationalists' predictive model projected an existential crisis befalling American Empire and leading to its implosion as a unitary state in the 2020's. Whether provoked by the extraconstitutional theft of a national election, a coup, or civil war, Donald Trump, the Republican Party, and white power militias are preparing to seize power and impose authoritarian rule.
We view National Divorce, if aggressively pursued, as a potent contingency to derail the gathering menace of American autocracy. Further, we envision the National Divorce movement as a contested space where divergent forces must openly grapple with the logic and architecture to reconfigure Pax Americana into a new concert of independent states.
How to partition Washington's failed federal system into more representative polities that are sufficiently robust to sustain their sovereignty is one question. Can National Divorce avert the U.S. governments' fall and descent into sectarian violence, civil war, and apocalyptic carnage is the other?
Should National Divorce's dominant position remain advocating the partition of America into two warlord camps of blue states and red states, the answer to both questions is no. In our view, this reductive and exclusionary line of thought condemns the new-born project to crib death.
New Black Nationalists enter the National Divorce dialogue at a time when it's threatened by stasis on the one hand and contending with new forces entering its political ecosystem on the other. In the aftermath of the January 6 Capitol Coup, and the Supreme Court's Dobbs decision eviscerating women's reproductive freedoms, two camps may be vying for political dominance and organizational capture.
In May 2022, ​the Paulist-leaning [Ron Paul] Mises Caucus (MC) took control of the Libertarian Party's national leadership and most of its state parties. Soon thereafter, the Mises Caucus announced its support for state secession and National Divorce. Notwithstanding our serious political disagreements with the Libertarian Party, we commend the Mises Institute's intellectual engagement on the issue and its serious analytical products.
In December 2021, conspiracy theorist, Republican Representative Marjorie Taylor Greene floated the idea of supporting national divorce. The headlines went viral. Greene may have been fishing for clickbait, but her stunt opened the doors for MAGA Nation to target a National Divorce movement that currently lacks a force capable of holding its center.
In September 2021, a University of Virginia's Center for Politics survey, found 41 percent of Biden voters in the 2020 presidential election think the country should separate into two nations, while 52 percent of Trump' voters support separation. If MAGA forces establish a beachhead in the National Divorce movement, it could quickly trend towards states' right secession reminiscent of the 1860 birth of the Confederate States of America.
Opposing those who would render National Divorce as a space of intolerance and discord, New Black Nationalists argue for a just redesign of America's failed imperial system. Creating majority Black-led polities and alternative autonomous vehicles for Hispanics, and Indigenous Natives represents a more equitable, durable, and peaceful decentralized solution.
To that end, New Black Nationalists are proposing a tentative framework to develop the logic and architecture of an alternative National Divorce strategy. Some of the components of our proposed framework includes the following recommendations.
1) The partition of American Empire to create a new concert of polities based on racial, partisan, ideological, culture-based, and confederated polities. These new polities can be generally grouped in five categories.
Racial - Black, Indigenous, and Hispanic nation state and city-states
Partisan - red, blue, and purple states
Ideological - Cascadia regional environmental state, Socialist republic
Cultural - Women/LGBTQ nation or city states, autonomous regions
Confederated Nation - Seceding states forming a voluntary union
2) A new National Divorce plan establishes two basic groups of polities that exit American Empire via secession or national self-determination. The first group of partisan, ideological, and culture-based states secede from the United States. The second group of racial and ethnic populations assert the right to national self-determination and autonomy.
3) The right of states to legally secede is supported. Constitutionally speaking, the legal right of states to secede has never been directly decided by the Supreme Court. We hold that Chief Justice Chase's opinion in White v. Texas (1868) does not substantively refute the body of Tenth Amendment arguments proffered by states' rights advocates, nor elements of the Compact Theory articulated by James Madison and Thomas Jefferson in the Kentucky and Virginia Resolutions.
4) All seceding states and nations/ethnic groups should hold popular referendums affirming by a simple majority vote, the people's desire to secede or exercise the right to self-determination or autonomy.
5) Draft a uniform and reciprocal protocol to process population transfers for individuals wishing to leave one sovereign state to seek citizenship or legal standing in another state.
6) The National Divorce movement's cause would be well served by a legal test case on the right of states to secede with the potential to reach the Supreme Court.
7) Working with legal, constitutional, and international law experts, National Divorce advocates should draft a proposed bill to be introduced in Congress. The bill would outline a federal process for secession, similar to Canada's Clarity Act Bill C-20 that defined a federal process of Quebec's Secession.
8) A Deconstitution Convention or National Divorce conference should be called in the spring of 2024 to draft a consensus statement outlining the principles and goals of the National Divorce movement.
These recommendations represent an attempt to define a baseline and generate input, modifications, and additional proposals. We welcome your comments and posts @VeseyRepublic.
New Black Nationalists Call for a National Divorce
Initiative
NewBlackNationalism.com 9.5.2022
The Case for American Secession
by Michael Malice - 6.29.2016
Separate or Die
by Freddie Franklin, Libertarian Mises Caucus - 8.6.2022
The Clarity Act Bill C-20
An Act to give effect to the requirement for clarity as set out in the opinion of the Supreme Court of Canada in the Quebec Secession Reference - June 2000
Articles
​Recommendations
Framework for the National Divorce Question.