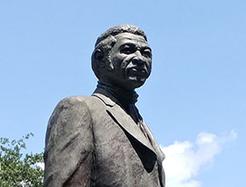 The Vesey Republic
Project of the New Black Nationalist Movement
lllll
​NBN Home
A Matrix of Government Forms to Create a Republic
A republic (Latin: res publica) is a form of government in which the country is considered a "public matter", not the private concern or property of the rulers. The primary positions of power within a republic are not inherited but are attained through elections expressing the consent of the governed. Such leadership positions are therefore expected to fairly represent the citizen body. It is a form of government under which the head of state is not a monarch. In American English, the definition of a republic can also refer specifically to a government in which elected individuals represent the citizen body, also known as a representative democracy (a democratic republic) and exercise power according to the rule of law (a constitutional republic).
Democratic Republic - Republics where the laws are ultimately decided by popular vote, whether by a body of elected representatives or directly by the public, and there is no restriction on which laws are passed so long as they have majority support. Constitutional law is either non-existent or poses little obstacle to legislation.
Federal Republic - Republics that are a federation of states or provinces, where there is a national (federal) law encompassing the nation as a whole but where each state or province is free to legislate and enforce its own laws and affairs so long as they don't conflict with federal law. Examples include Argentina, Austria, Brazil, Germany, India, Mexico, Russia, Switzerland, United States and Nigeria.
Islamic Republic - Republics governed in accordance with Islamic law. Examples include Afghanistan, Iran, Mauritania, and Pakistan.
Parliamentary Republic - Republics, like Germany, India or Singapore, with an elected head of state, but where the head of state and head of government are kept separate with the head of government retaining most executive powers, or a head of state akin to a head of government, elected by a parliament.
Presidential Republic - Republics with an elected head of state, where the head of state is also the head of the government. Examples include United States, Mexico, Brazil, and Indonesia.
People's Republic - Republics that include countries like China and Vietnam that are de jure governed for and by the people. The term People's Republic is used to differentiate themselves from the earlier republic of their countries before the people's revolution, like the Republic of China.
​Constitutional or Parliamentary Monarchy - Also called parliamentary monarchy, the monarch's powers are limited by law or by a formal constitution,[25][26] usually assigning them to those of the head of state. Many modern developed countries, including the United Kingdom, Norway, Netherlands, Australia, Canada, Spain and Japan, are constitutional monarchy systems.
Social democracy rejects the "either/or" phobiocratic/polarization interpretation of capitalism versus socialism. Social democracy argues that all citizens should be legally entitled to certain social rights. These are made up of universal access to public services such as: education, health care, workers' compensation, public transportation, and other services including childcare and care for the elderly. Social democracy is connected with the trade union labor movement and supports collective bargaining rights for workers. Contemporary social democracy advocates freedom from discrimination based on differences of ability/disability, age, ethnicity, sex, gender, language, race, religion, sexual orientation, and social class.
Liberal Democracy - A form of government in which representative democracy operates under the principles of liberalism. It is characterized by fair, free, and competitive elections between multiple distinct political parties, a separation of powers into different branches of government, the rule of law in everyday life as part of an open society, and the protection of human rights and civil liberties for all persons. To define the system in practice, liberal democracies often draw upon a constitution, either formally written or uncodified, to delineate the powers of government and enshrine the social contract. After a period of sustained expansion throughout the 20th century, liberal democracy became the predominant political system in the world. A liberal democracy may take various constitutional forms: it may be a republic, such as France, Germany, India, Ireland, Italy; or a constitutional monarchy, such as the United Kingdom, Japan or Spain. It may have a presidential system (Colombia, Brazil, Mexico, or the United States), a semi-presidential system (France, or Portugal), or a parliamentary system (Australia, Canada, Germany, Ireland, Italy, or New Zealand).