​Feature
SOUTH AFRICA PROJ.
NewBlackNationalism.com
News - Washington Post
​05.05.2022
New Black Nationalist Network
Today, the New Black Nationalist Network condemned the Supreme Court's February 10,2022, 1st Draft Opinion on Dobbs Vs. Mississippi Department of Health. The opinion supported by a majority of five justices, held "Roe [v. Wade] was incorrectly decided," and "egregiously wrong from the start."
Samuel Alito's opinion to overturn Roe is an unbridled attack on women's independence and autonomy that denies their right to make life-sustaining decisions uniquely determined by childbearing. But it is more than that. The hard right’s fifty-year guerilla war that "chipped away" at reproductive rights to “protect the unborn” has escalated to holding death warrants over the heads of the living. Forty million women in two dozen states could be adversely impacted if Alito’s opinion is upheld--none more so than Black women. We have entered a new stage in the Abortion Wars: one of positional warfare with white nationalists, the religious right, and the Republican Party.
Alito’s majority opinion allowing states to determine abortion access will substantially increase Black women and teenage girls’ maternity mortality rates, not just because more Black women and teens may resort to illicit procedures and home remedies to self-abort. Black maternity mortality rates that are already three times higher than their white counterparts will spike because more women die during pregnancy than do those receiving safe abortions. Unplanned pregnancies and pregnancies without pre-natal care will unleash a torrent of serious medical illnesses.
Moreover, Black women and teens will simply be priced out of abortion services in states maintaining reproductive rights. Today, 1.1 million women in Louisiana travel 33 miles one way to receive reproductive services. That will increase to 670 miles one-way if Roe is upended. Needless to say, plane fares to states with legal abortions are out of reach for many of the 70% of women living below the poverty line.
Worse still, Alito's opinion would criminalize abortion immediately in 13 states, and shortly thereafter in 12 more states like Michigan that would re-instate a 1931 felony law with no
exceptions for rape or incest. Raped teens will be forced to give birth to children.
In Texas, women more than six weeks pregnant are criminalized and subject to surveillance
with a $10,000 reward on their heads by bounty hunters. One wonders what will come next:
police roadblocks, porta-johns and rapid pregnancy tests set up at state lines. In essence, a pregnant woman seeking an abortion in a Hand Maid's State, will become wards of the state.
​Those who believe the Democrat congress and Biden will pass federal legislation to codify abortion rights are naïve or being gaslit. Democrats in Congress cannot get this done. Today’s new Abortion Wars of “fixed position” is situated on the fault lines of Red State and Blue State legislatures. This is war of retribution of the Old Testament white evangelical church on women—the only religious strand in America with majority support for a total ban on abortion. This is a war of the carceral and surveillance state and vigilantes on women. Most of all, this positional war is going to be a bare-knuckled street fight for contested spaces in core urban centers, white suburban enclaves, college campuses, and social media outlets.
Should Republicans take control of both houses in November 2022, their first order of business will be passing a national abortion ban. Alito's opinion asserts "The Constitution makes no mention of abortion," therefore it is not grounded in constitutional jurisprudence. That fine point of law has set off alarm bells that birth control, gay marriage, and interracial marriage are now on the chopping block. All that's true.
But New Black Nationalists want to be clear: Alito's opinion is a white heteropatriarchal sledgehammer to bash women into submission, particularly the majority of Black women who live in Southern "Handmaid States. "
It was thought that when Amy Coney Barrett was nominated to the Supreme Court, one of her tasks would be to write the majority opinion when the 6-3 conservative bench appointed the hour to overturn Roe. But it wasn’t Coney Barrett, the cerebral intellectual and mother of five children who would craft a softer and nuanced argument eviscerating most of Roe’s components.
No. It was Sam Alito, the angry white man using blunt and acerbic language that rejected the whole of Roe and brooked no compromises. Alito’s edict was elaborated in punishing language designed to invoke terror. This should not be surprising as Alito was writing to an American public maintaining majoritarian support to maintain Roe as the law of the land.
We are thus reminded of Justice Sonja Sotomayer's December 10, 2021, warning about the Supreme Court's decision to delay taking action on Texas Senate Bill 8, restricting abortion rights. Sotomayor averred that "S. B. 8’s existing manipulation of state court procedures and defenses echoes the philosophy of John C. Calhoun, a virulent defender of the slaveholding South who insisted that States had the right to “veto” or “nullify” any federal law with which they disagreed."
Sotomayor's reference to "states' rights" and the slaveholding South conjures visions of a portal to transport women back to an era of Jane Crow, Handmaid States, or Fatimah Mernissi's "Time of Troubles." When the Caliphate was in crisis, women were locked in their homes. So too, American Empire is spiraling toward an existential crisis it cannot extricate itself from.
Thus, the orders to shutter women in their homes and secure their virtue in chastity belts have come rolling on down on high from the marble enclosures of the Supreme Court and its lawgiver Alito. But all he’s done is to accelerate the gathering confluence of events that will hasten the collapse of the imperial Cathedral on the Potomac and the women who will lead the assault on its gates.
Erasing Roe: A Jane Crow & Handmaid's Tale 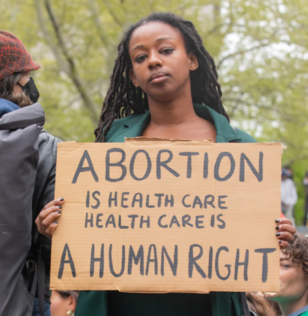 ​Editorial
New Black Nationalist Network
News & Updates
05.06.2022
The Guardian
Republicans in Louisiana have advanced a bill to make abortion a crime of murder, as a draft decision that would end abortion rights continues to spark nationwide protests and police in Washington raised “non-scalable” fences around the supreme court.
Supporters admitted the bill, under which a woman terminating a pregnancy or anyone assisting her could be charged, was unconstitutional – as long as Roe v Wade was law.
The supreme court is expected to formally overturn Roe v Wade, the 1973 case which established the right to abortion, in June.
Danny McCormick, the state representative behind the Louisiana bill, said: “We can’t wait on the supreme court.”
Read more.... 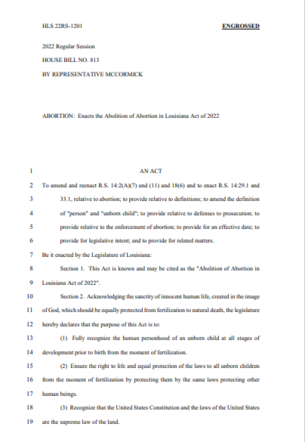 Louisiana House Bill No. 813
Abortion:  Enacts the Abolition of Abortion in Louisiana Act of 2022
The Supreme Court Took the Most
Extreme Course Possible
06.24.2022
The Supreme Court has issued its ruling in Dobbs v. Jackson Women’s Health. It has said unequivocally, by a vote of 6-3, that “the Constitution does not confer a right to abortion,” and that Roe v. Wade and Planned Parenthood v. Casey are “overruled.”
The majority opinion, written by Samuel Alito and largely conforming to the draft of this opinion leaked a month ago, is the most extreme version of this ruling possible. The issue at the heart of the case was a ban in Mississippi on abortions after 15 weeks of gestation. That ban was intended, clearly and directly, to frustrate the work of Jackson Women’s Health (the only abortion clinic in the state of Mississippi), which provided abortions up to 16 weeks. The conservative majority could have simply upheld the 15-week ban. Instead, it chose to tear down the whole constitutional edifice making abortion legal and revoke the right to bodily autonomy.
Read more....
Analysis by Elie Mystal
Feature Forum 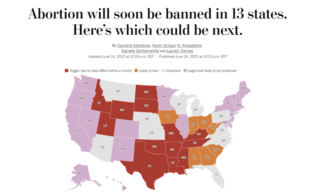 Supreme Court overturning Roe v. Wade sets off a cascade of antiabortion laws
06.24.2022
By Caroline Kitchener, Kevin Schaul, N. Kirkpatrick, Daniela Santamariña and Lauren Tierney
Map 1. States with abortion bans that will take effect within one month
Map 2. States likely to ban abortion within weeks or months
Map 3. States where the fate of abortion rights remains uncertain
Map 4. States where abortion is legal and likely to be protected 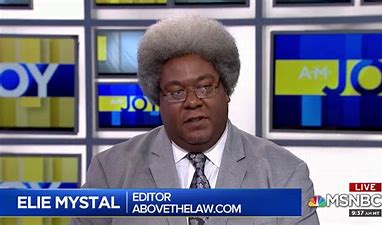